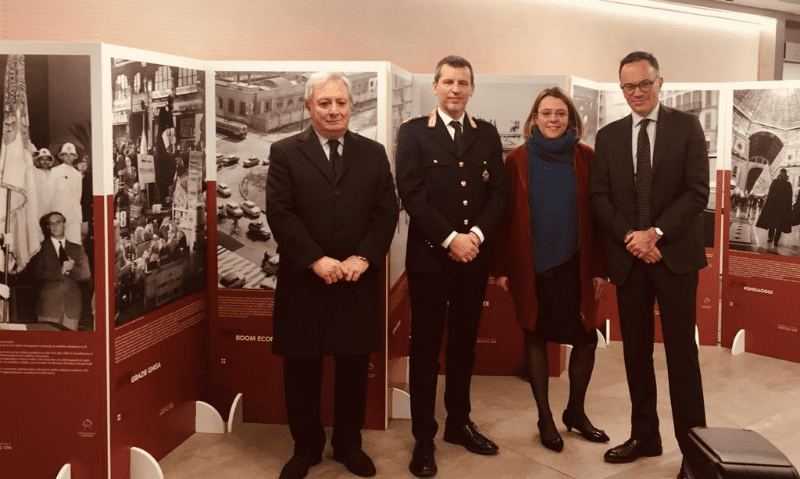 The exhibition on the Milanese “Ghisa” was inaugurated on 20 February at Milan Linate airport (arrivals area, ground floor): an exhibition of 12 images, which traces the history of the Milan Local Police (the “Ghisa”) from its origins in 1860 to the present day.

The exhibition has been organised by the Municipality of Milan and was launched a few months after the presentation of the 2019 Local Police Calendar – sponsored by Safety21 – and which features the same theme and images. The subject of the exhibition, like the calendar, is in fact the changing face of the local police force over the years, also linked to the changing face of Milan, both in terms of historical places and social life.

The images bear witness to the constant presence and professionalism of the Milanese Local Police during the many changes that have taken place over the years, from the founding of the Corps to the present day. Since 4 October 1860, when fifty officers of the Public Urban Surveillance, the so-called “Survegliant”, made their first appearance on the streets of Milan wearing an elegant blue uniform and a flashy top hat – and were immediately given the friendly nickname “Ghisa” – about three thousand officers and officials, on duty 24 hours a day, 365 days a year, to guarantee road, urban and regional safety for the entire community.

The exhibition will remain on public display for 15 days. The following took part in the inauguration: Anna Scavuzzo, Deputy Mayor and Security Councilor; Marco Ciacci, Commander of the Local Police; and Armando Brunini, Chief Executive Officer of SEA Airport Group.